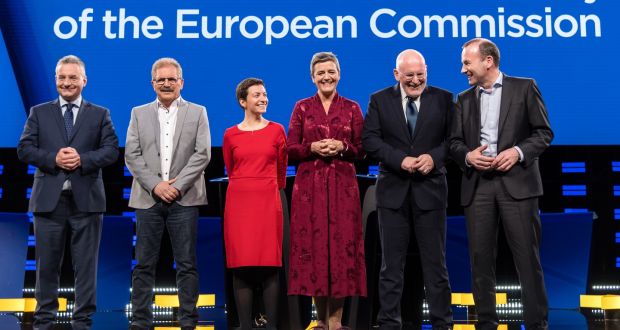 Frans Timmermans was being careful. The European Commission vice-president, who is the socialist group’s (PES) nominee for the commission presidency, was keen to insist that EU corporate tax rates should be set at a minimum of 18 per cent.

He was reluctant, however, to point the finger at member states such as Ireland and his own country, the Netherlands, which it was suggested to him were, among others, “tax havens”.

The member states concerned were sensing the changing climate on tax and changing their ways, he told the Eurovision TV debate between the main spitzenkandidaten, the parties’ “lead candidate” nominees for Jean Claude Juncker’s job.

The debate took place in the European Parliament chamber in Brussels in front of  an audience of hundreds and in the form of the political equivalent of speed dating.

Each of the six candidates for the top commission job made one-minute statements on a range of topics and 30-second replies to questions, a discipline carefully observed with a remarkable politeness and lack of rancour

Manfred Weber, the champion of the centre-right European People’s Party (EPP), was far less coy that Timmermans on the corporate tax issue. “I was a proud European,” he proclaimed, “when the commission decided to act on Apple”, and he praised fellow spitzenkandidat of the liberal (Alde) group Margrethe Vestager, commissioner for competition, for her €15 billion fine on the giant tech company for accepting illegal tax benefits from the Irish state.

Weber’s Irish political partner and strongest advocate Leo Varadkar will have winced as the German moved on to advocate ending national vetoes on tax.

Vestager was more circumspect. Tax havens, she said to laughter, were places “where everyone pays tax” – earning her points perhaps for humour, but a telling reflection of the Danish woman’s lack of clear political punch.

Ska Keller of the Greens said the strongest members of society were running away from their responsibility to help fund services. “The key is we have tax justice,” she said, urging a minimum corporate tax rate.

Only one voice represented the elephant in the European room, the rampant Euroscepticism and populism that stalks almost every member state. Czech MEP Jan Zahradil the flew the flag of the parliament’s largest Eurosceptic group, the Conservatives and Reformists, to which the UK Tories are affiliated.

People were tired of integration, he said, they wanted a Europe that did less, better. “More Europe” was not always the solution, he insisted. His mantra was to insist repeatedly on the primacy of member states, opposing suggestions from all the other candidates that veto-voting on tax, migration or foreign policy should be ended.

Weber retorted that it was a disgrace that the EU had taken four months to reach an agreed position on Venezuela because of the solitary Greek veto.

Timmermans had the best line of the night in referring to British Brexit politics as  “Game of Thrones on steroids”.

Weber spoke of the “fight against nationalism and those who want to destroy our Europe” and, clearly alluding to Hungary and Poland, said “we need binding rule-of law mechanisms” whose writ could be enforced by financial penalties.

Keller was not going to let that pass, taking a swipe at Weber’s EPP for its Austrian member’s collaboration in government with the far right.

Nico Cué, of the hard left EL, put the rise of the far right and fascism in Italy, Hungary and elsewhere down to the erosion of society in the austerity cutbcks to pensions, services and jobs that are associated with Europe. “Either Europe looks after markets or its people,” he said.

Cué said he wanted a Europe of the sort of solidarity his father, an Asturian miner, received when he fled Franco’s Spain as a political refugee. Solidarity in resettling migrants was crucial.

Keller also demanded greater solidarity with migrants. It was completely unacceptable that people were dying in the Mediterranean. “No one is answering the phone,” to appeals for rescue, she said, and deplored EU support for militias in Libya.

Vestager called on EU countries to come together to make sure an offer of a job to young people became a guarantee. Twelve million jobs had been created in the last five years but they didn’t necessarily pay well and nor were not secure, she said.

Keller emphasised the opportunities in the green economy for tackling unemployment while Timmermans acknowledged the record of the Greens and Cué in making the case for green jobs. “Let’s work together,” he said, building “an alliance from Tsipras to Macron”, an appeal that suggested where he might hope to get votes for the commission presidency. And he argued for imposing tax on kerosene and CO2.

Weber responded that the EPP fully supported the aim to make the EU carbon neutral by 2050, but said it must be done in a way that was sustainable. “I don’t accept pensioners or car workers must pay the price.” He said his party had been warned by trade unions that if Green policies were implemented workers would suffer.

On trade Keller stressed the need to make EU trade a “ force of peace and human rights”. It was not right to sell weapons to dictators, she said.

Timmerman insisted that if the EU remained united it was stronger than China and he attacked EU leaders such as Hungary’s Viktor Orban who were prepared to sidle up to either Russia’s Vladimir Putin or Donald Trump.

Women had achieved much but far more needed to be done, Vestager said, while Timmermans said it was crucial to “ put end to violence against women”.

The debate took place in the parliament chamber in Brussels on Wednesday and involved the main “lead candidates” – or spitzenkandidaten – put forward by the main European Parliament’s parties for the post European Commission president.

The spitzenkandidat who secures a majority governing coalition in the European Parliament (353 MEPs) will – like Jean Claude Juncker of the EPP in 2014 – get the job if approved by the heads of state and government in the European Council.

But the latter have not yet committed wholeheartedly to adhere to the system and in the end have the sole prerogative on deciding who will succeed Juncker, whose term of office concludes this year. He i snot seeking a further term.

Alde, the political group to which Fianna Fáil is affiliated, does not support the spitzenkandidaten process and has no specific candidate for the Commission presidency; one of its slate of seven lead candidates took part in Wednesday’s debate.

The debate participants were:

Nico Cué, European Left (EL) or GUE/NGL – secretary general of the Metalworkers’ Union of Belgium and one of two spitzenkandidat for the hard left group, to which Sinn Féin affiliated.

Ska Keller, European Green Party (EGP) – one of the party’s two spitzenkandidat. The Irish Green Party is affiliated to this group.

Frans Timmermans, Party of European Socialists (PES) – a vice-president of the European Commission. The Irish Labour Party is affiliated to the socialist group.

Margrethe Vestager, Alliance of Liberals and Democrats for Europe (Alde) – commissioner for competition and one of the group’s seven lead candidates. Fianna Fáil is affiliated to Alde.

*Poll projections are aggregated polls in each constituency brought together by the independent analyst Europe Elects.