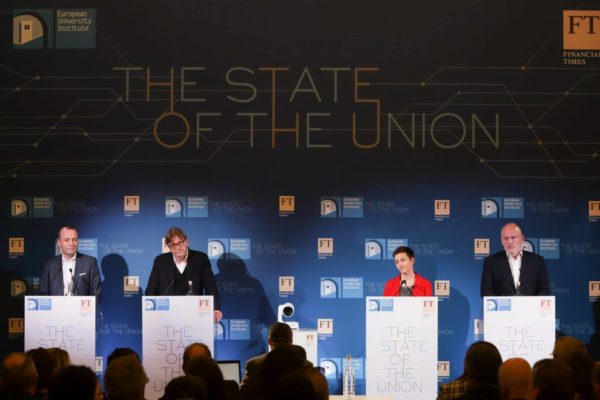 Just days before the European Parliament elections, the lead candidates for President of the European Commission from the major European political parties – also known as spitzenkandidaten – came together to discuss their vision for the Future of Europe.

The main message that came across during the debate on Digital Europe was the need to regulate and tax tech giants such as Facebook, Google and Amazon. The majority of candidates agreed that this power needs to be given to the European Union, while Jan Zahradil argued taxation is a matter of national competence.

In the debate on a Sustainable Europe, all candidates besides Jan Zahradil expressed their support for the school climate strikers. While most candidates were supportive of ambitious climate goals, Jan Zahradil argued not all countries are ready for a rapid energy transition and acting too fast risks damaging the economy and raising poverty levels across Europe.

In the debate on Future Europe all candidates committed to creating a gender-equal cabinet of Commissioners. While most candidates agreed on the need for the EU to build a strong European Pillar of Social Rights, including a minimum social security net, minimum income and minimum wages, Jan Zahradil again highlighted the need to defend national competences.

If you have not yet had the chance to watch the debate, you can do so here.

If you have not yet had the chance to watch the debate, you can do so here.